Subscribe now to our newsletter! Free for you 10% OFF - Buy now! 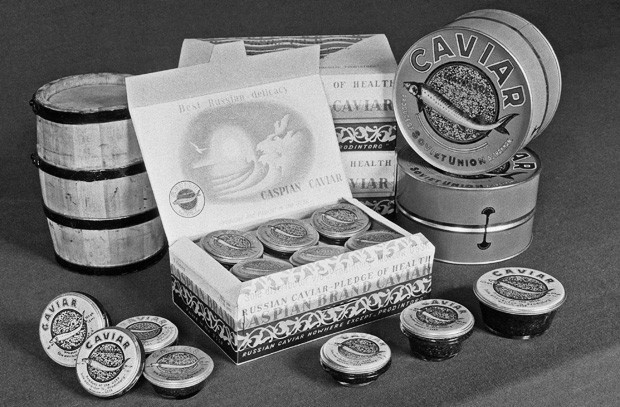 Not many people are aware of the fact that the etymology of the word ‘caviar’ remains unknown. Some believe it is derived from the Greek word ‘avyron’ (egg) or from the Persian ‘haviar’ (fish eggs), and others say it has Italian origins. More commonly it is thought to come from Russian, even though the word caviar in Russian is ‘ikra’, which means fish eggs, whereas the word sturgeon (to define any species) is ‘osetr’.

It is not known with certainty who were the first “producers" of caviar. Some hypothesize the ancient Egyptians, the Greeks and Chinese, or the Turks and Persians who fished sturgeons directly from the Caspian Sea and used the only method of preservation known at that time: salt.

We do know, however, that caviar in Russia became a very important food and cultural symbol; a “brand” recognizable all over the world.

During the reign of Peter the Great (1672-1725), Russian nobles traveled throughout Europe, learning new customs and traditions and at the same time introducing the European world to Russian culture and cuisine. Peter the Great was the first Tzar to create the department for the commercialization of fishing in Astrakhan: granting the Cossacks exclusive rights for sturgeon fishing and making it easier to control the market. With the arrival of Catherine the Great (1729- 1796), interest in caviar was transformed from a traditional Russian dish to a luxurious delicacy. When she granted the exclusive right to fish in the Caspian Sea to a Greek captain (Varvakis), the doors were opened for solid distribution and export.

The biggest problem, however, was the preservation of the caviar during the journey to its final destination. At the beginning of the 19th century with the invention of steam ships, it was possible to speed up transportation times. When it was discovered how to produce ice, this new method of preservation was introduced inside the ships, allowing the product to arrive at its destination fresh. Moreover, thanks to this innovative preservation process, the salting of the caviar in the production phase underwent a drastic decrease, therefore resulting in a more pleasing and lighter taste.

The construction of the railway along the Volga river contributed to another development for faster transportation times. With the arrival of Tzar Alexander I (1777-1825), many French chefs were invited to St. Petersburg in order to make caviar known and appreciated. At the time of Tzar Nicholas II (1868-1918), caviar, which had already become too precious to be sold to Russian peasants and now being commercialized in all Europe, became a delicacy destined only to rich people. Tzar Nicholas, firmly convinced of the benefits it could bring to his health and to the health of his children, consumed huge quantities of it every day. From 1869 to 1900, the production of caviar in the Caspian Sea increased from 4 tons to 3,000 tons, with negative consequences for the population of sturgeons.

The transformation of the Russian Empire into the Soviet Union in the 1920s brought the need for a stronger currency, and thus the monopoly of caviar sales was granted to a single French dealer (two brothers of Armenian origin): Petrossian. During this period, state fishing was strictly controlled, and new processing plants, research stations, and hatcheries were created to increase the production of this product, now considered the ultimate status symbol. The task of fixing the annual price and the quantity of caviar to be put on the market (from the Soviet Union and Iran) was entrusted to the state agency Prodintorg.

With the collapse of the Soviet regime came the end of state-regulated sturgeon fishing and caviar production. With many state-owned factories shutting down and creating unemployment, much of the working population tried to return to their origins as fisherman. Fishing, now unregulated, did not allow sturgeon to reach maturity for reproduction, however. This, coupled with a strong increase in demand from international markets, led to harmful consequences for the sturgeon population.

In the 2000s, the CITES (Washington Convention on International Trade in Endangered Species of Wild Fauna and Flora) added sturgeon to the  endangered species list, banning free fishing for sturgeon in salt and fresh waters and granting caviar production only to farms. In this way, it is guaranteed that the final product will be traceable by origin, type, date of production, and species of sturgeon.